Who Invented the First Hearing Aid? 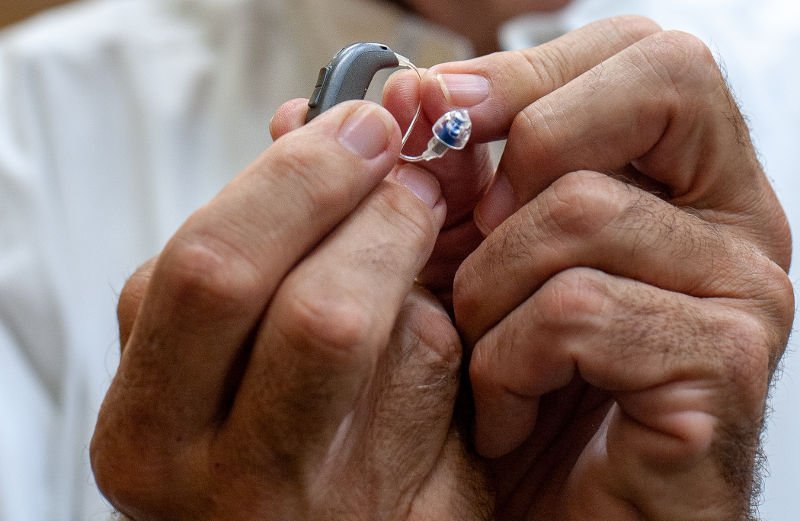 For as long humans have been hearing, we have been dealing with hearing loss and therefore, trying to learn about the complicated ways that the ear works, and different ways to cope with the loss of hearing function. When you first receive hearing aids they may seem like a modern wonder, a technological miracle fit for the 21st century. Hearing aids, however, have actually been around much longer than that. The first technical hearing aid was invented in the 17th century and the first electrical hearing aid was invented in 1898 following the invention of the telephone.

The Learning Curve: Horns to Telephones

The field of audiology is the study of hearing, and focuses on hearing loss and the prevention of hearing damage. As audiologists have continued to study and learn more about the way sound moves through our ears, the quality of hearing aids has progressed significantly.  The first hearing aid actually started as an animal horn, and then moved on to metal horns and collapsible horns. These horns couldn’t help those dealing with significant hearing loss, but could help amplify sound for those with moderate hearing loss. Rein, the most prominent “ear trumpet” inventor at this time, developed the “acoustic headband” in which these trumpets could actually be concealed in the hair of the user. In 1818, a special acoustic chair was invented for the King of Portugal which involved intricate arms that funnelled sound up through the chair and into a tube next to the King’s ear. While this feat was amazing for it’s time, it was not particularly effective. With the advent of electricity, hearing aid technology took a quantum leap.

Alongside the invention of the telephone came the electrical hearing aid which we know today. Telephones brought the ability to control sounds’ loudness and frequency which were essential for effective hearing aid devices. Miller Reese Hutchinson created the first electric hearing aid in 1898, using electric power to boost audio signals. Thomas Edison actually suffered from hearing loss himself. All carbon hearing aids hold a version of a carbon transmitter that he invented.

In the early 20th century came Louis Weber’s invention of the Esha-Phonophor, designed to amplify sounds with little interference when it was discovered that those with hearing loss find it easier to hear sounds amplified through electricity. This device, the first Siemens hearing aid, was originally invented as a gift for a friend, but continues to be used to this day. It contained a small receiver and a three-volt battery and shifted the hearing aid market from large and bothersome to models that were smaller and more inconspicuous. Different variations held the microphone and battery in a purse or folding camera so hearing aid wearers could bring their devices as discreetly they pleased. Battery power, or the lack of it, was a significant problem for these early models and continues to be improved to this day. In this era of hearing aids, there was a larger emphasis on hiding hearing impairment from the public by further invisibilizing hearing aid devices, rather than creating devices that focused on helping those with hearing loss actually cope with the loss.

Transistors and the Digital Shift

Hearing aid development moved quickly from there. World War II helped push forward hearing aid technology with its emphasis on miniaturization. Transistors, invented by Bell Labs in 1948, led to the next leap in hearing aid technology- from analog to digital! All the iterations of hearing aid models discussed above would still be described as analog. The hearing amplification of these devices was done through a vacuum tube that was a large box to be carried around separately from the headphones which transmitted the amplified sound. The vacuum tube transformed the audio signal into an electric current which could then be amplified. The implementation of silicon transistors required much less battery power, therefore enabling a much smaller hearing aid with improved quality of sound and less sensitivity to interference and heat. Transistors quickly replaced vacuum tubes as an amplification method. They were so quickly implemented that problems arose, such as shorting when damp, because they weren’t thoroughly tested.

Bell Labs, the creator of the transistor used in hearing devices, was also instrumental in the creation of digital hearing aids in which sound signals were processed on a computer. At the time of this invention, 1960, computers were still too large and slow for this development to be considered useful for personal hearing devices, but with the invention of the microprocessor in the 1970s a miniaturized digital hearing aid became within reach. In this time period, hybrid hearing aids became popular- with analog amplifiers and signals combined with a digital programmable hearing aid case. This set-up allowed for the consistency and reliability of analog audio processing but with more control from the programmable digital aspects of this hybrid model. This model was also high performing while requiring relatively low power.

The first fully digital wearable hearing aid, invented in 1980 from the Central Institute for the Deaf, was made possible with the development of minicomputers and microprocessors. This device contained features used in most contemporary hearing aids, such as self-adjustment, wide bandwidth, and programmability. The first commercial hearing aid that was fully digital was not available on the market until 1996! In the last twenty years since that first widely available digital hearing aid, the technology available to everyday people has rocketed. Hearing aids can now regulate sound themselves, without the use of a separate remote. The 2000s brought bluetooth syncable hearing aids. And now there are even hearing aids that can sync to an iPhone and stream sound from the hearing aid, allowing users to take calls, and stream music and audio from their device in addition to the conventional hearing aid functionality.

When you receive your first hearing aid, whether it is Bluetooth enabled, syncs with your smartphone, or adjusts volume automatically, it is easy to forget how far we have come with hearing devices in such a short amount of time. You may take a moment to think what it would have been like to use one of those first “ear trumpet” devices, or even the “acoustic headband” hidden underneath your hair and batteries tucked into a purse. Learning about the development of hearing aids will help you understand your device more intimately, and appreciate the miraculous power, and long lineage of innovation it holds.